With the Covid restrictions eased somewhat, Chris was able to come over in person and while Tony was the ‘face on the computer!’ The Tudor army (green and white) was commanded by Tony from his distant vantage point and the Yorkist army (blue and white), by myself. Both armies had 15 units and 3 generals. Chris had the task of choosing and placing the terrain pieces which he did before either of the players knew which army or side of the table to start from – we let the dice decide these. 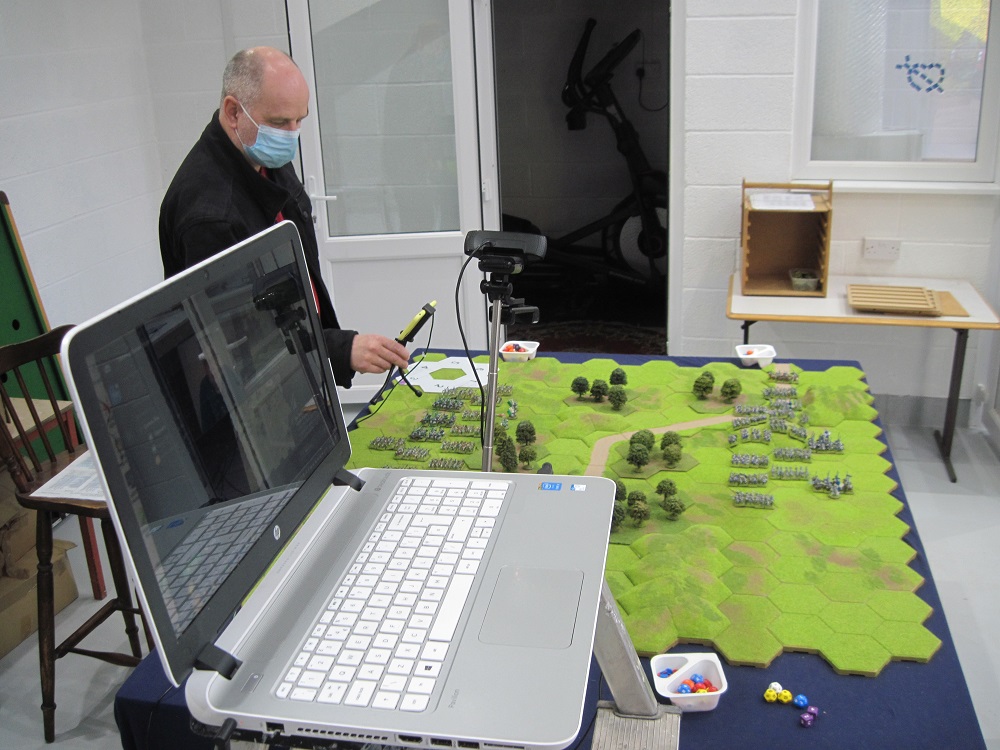 Chris nominated himself to become the official ‘mover’ for Tony’s units and more importantly, his chief dice roller - a great and noble responsibility! If things went badly for Tony, Chris could then take the blame! 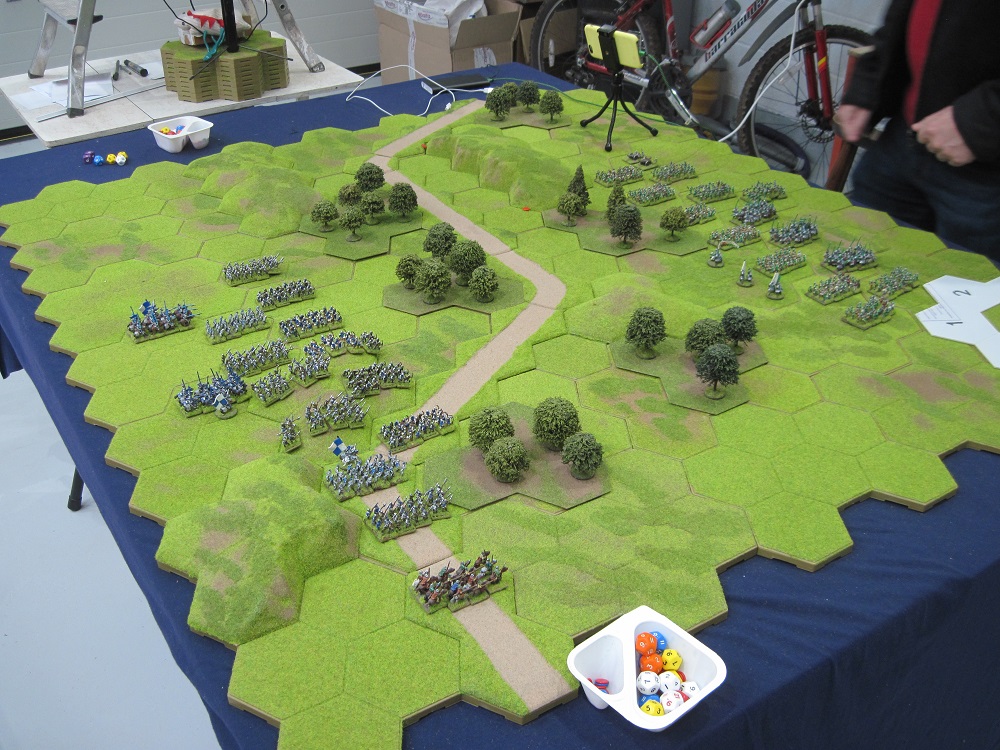 Tony’s Tudor army had more ‘firepower’ in that it had an extra unit of retinue longbow and a unit of multi-barrelled guns as well as 3 units of mounted men-at-arms, one more than the Yorkist army. However, the Yorkist army had an extra unit of retinue billmen and 2 units of dismounted men-at-arms which brought the points total for both armies to just over 200. 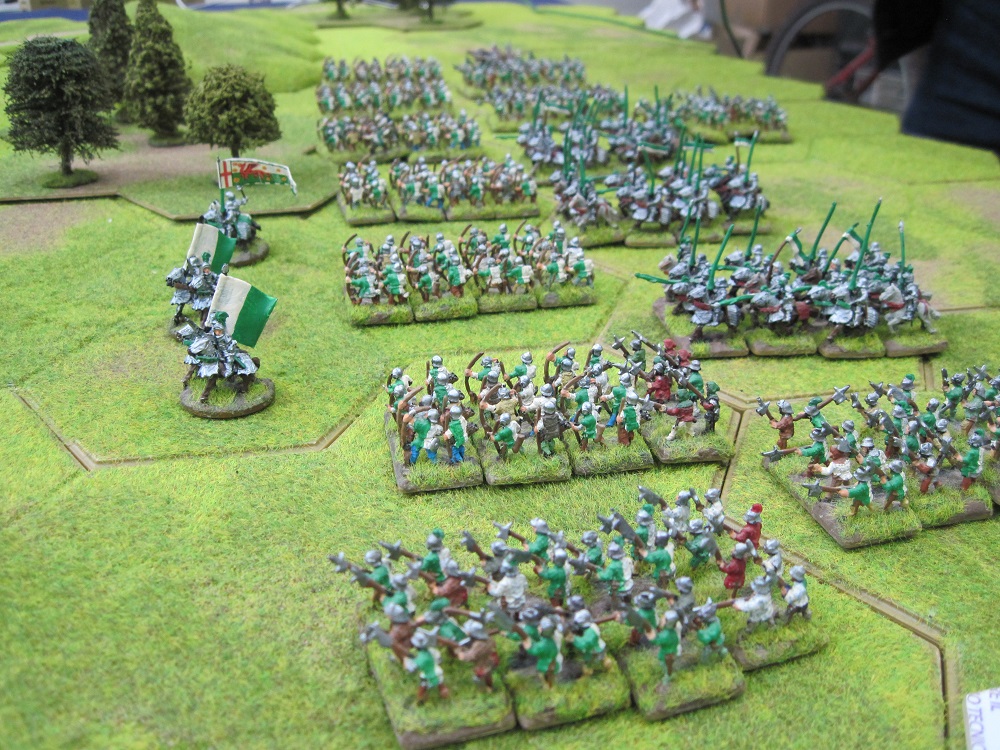 The terrain layout certainly favoured my Yorkists with plenty of cover in the form of 5 areas of woodland and very useful 3 hex hill located in the centre of the table where the two armies were destined to collide. Having taken careful note of Tony’s deployment I formulated a plan to send my mounted men-at-arms around the extreme right and my dismounted men-at-arms through the 4 hex wood against Tony’s left of centre accompanied by 2 of my three generals. This plan would prevent Tony making effective use of his missile troops – the multi-barrel guns were situated on an 8 hex escarpment on his far right. 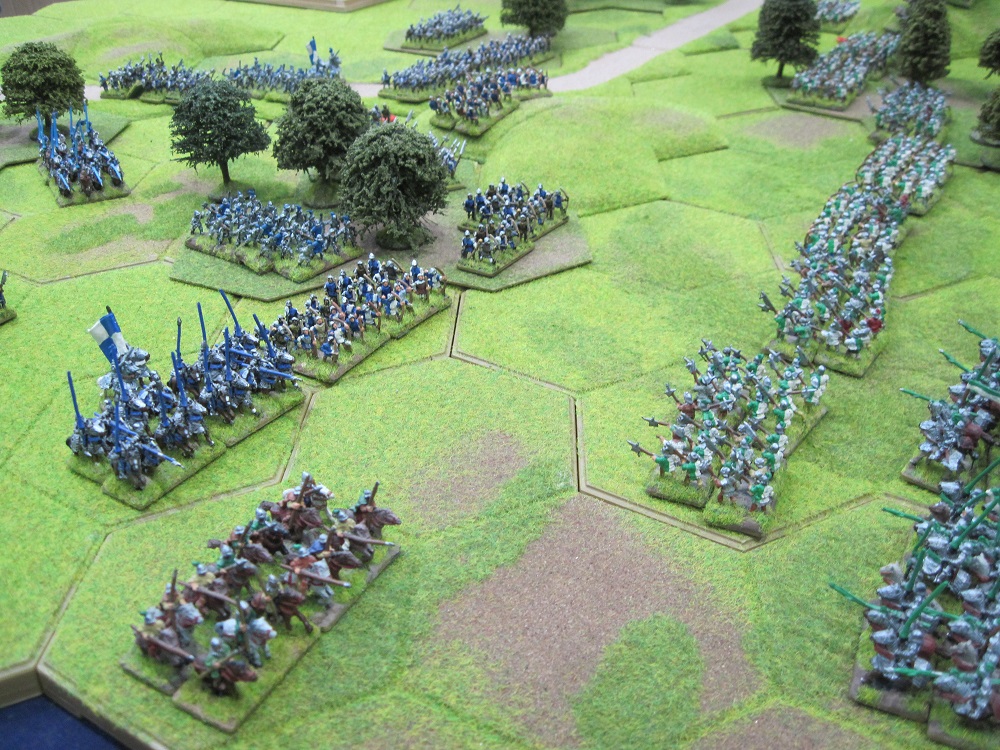 As the armies closed on each other Tony unexpectedly charged a unit of mounted men-at-arms into my line of longbow engaging two units. This caused both longbow units to recoil disrupted and each lose a stand. This further reduced my relative number of missile troops but by surrounding and destroying the afore mentioned assailants, this turned into a profitable exchange. 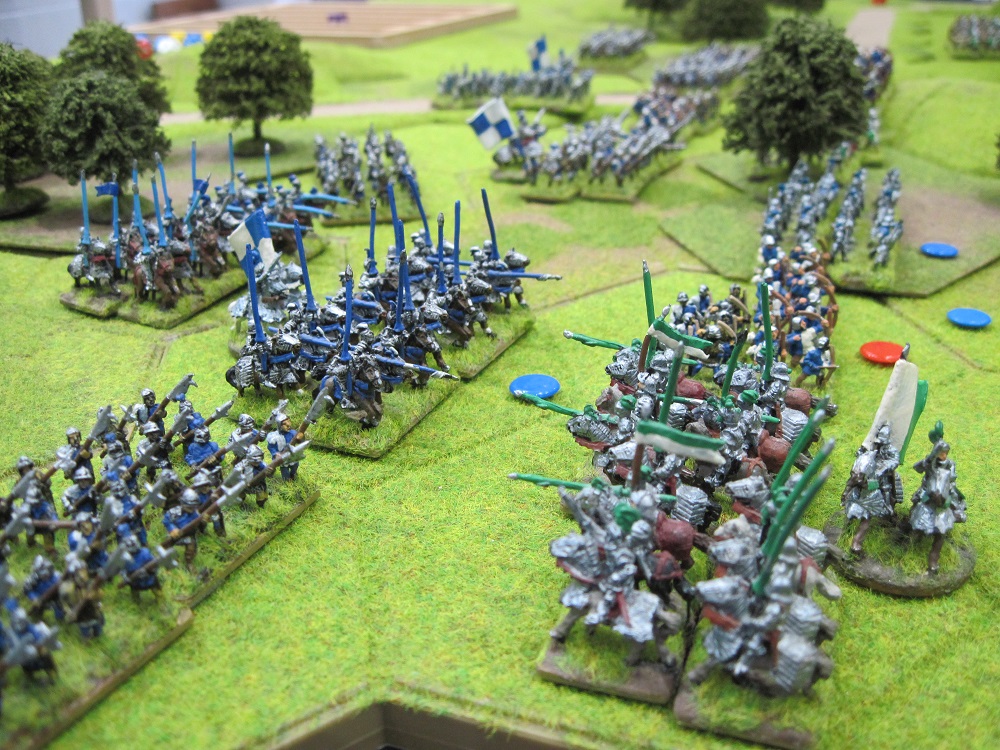 This distraction slowed my preparations for my assault on the right but not half as much as Tony’s next tactical surprise! He charged his remaining 2 mounted heavy cavalry against my cavalry and billmen into the wood to confront my dismounted men-at-arms. I had been positioning my units ready for an attack rather than forming an effective defensive line. The resulting hand-to-hand combats didn’t go in my favour and resulted in the loss of my unit of hobilars, the recoil of units of billmen and mounted men-at-arms with a general attached. 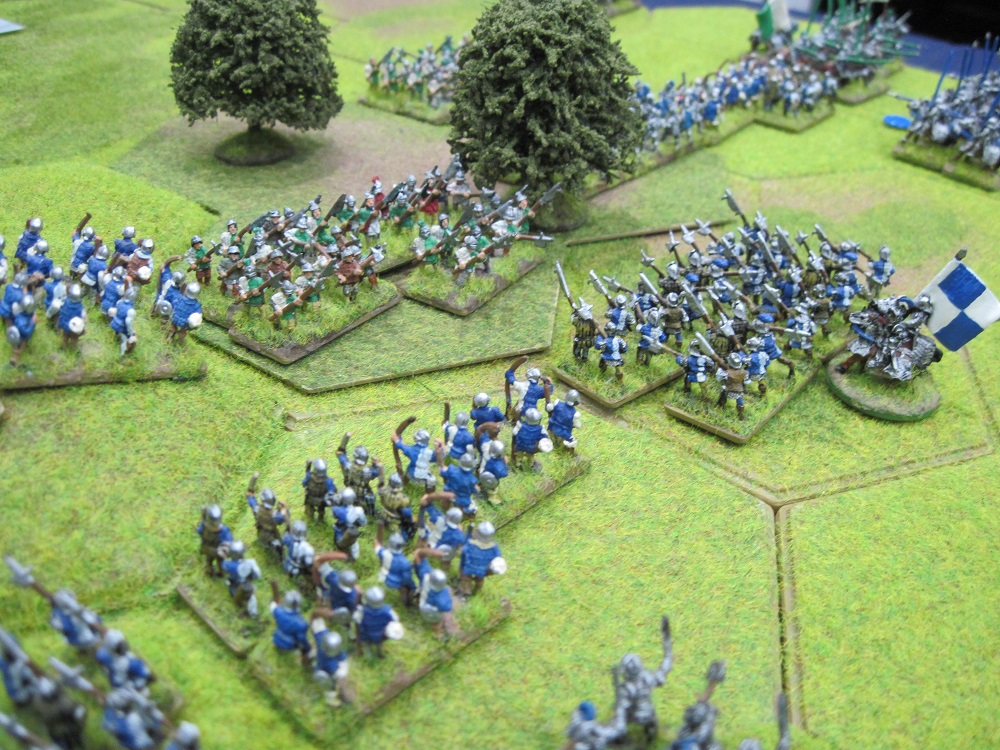 Tony, in just 2 tactical movement phases had completely stolen the initiative from my Yorkists. I was trapped into a policy of reactive management, which was more of a damage limitation exercise. I found myself hoping that dice rolls would reverse a rather unhealthy situation for my Yorkists!
Despite already having a 3 to 2 advantage in units on my now reeling right wing I was compelled to move generals and more units across from the centre in support. This in turn weakened my centre and left and in response, Tony started to advance his line of longbow units which compelled me to pull back to avoid what would be a very uneven shooting match. 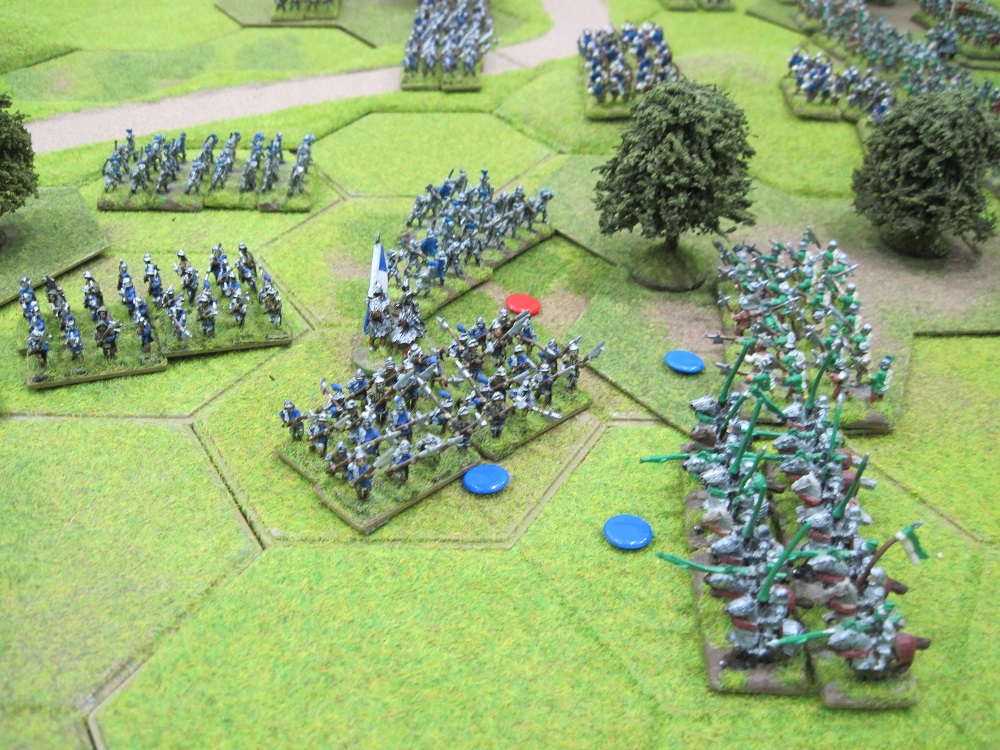 Chris’s dice rolling for Tony had been pretty good for hand-to-hand combats, but thankfully quite poor with the shooting dice. Because of this I was able to maintain occupancy and a tenuous control over a 3 hex wood securing my left flank, but not for long! A unit of Tudor mounted me-at-arms plus a general had pursued and destroyed its Yorkist equivalent and was now able to attack my centre moving quickly along the road. 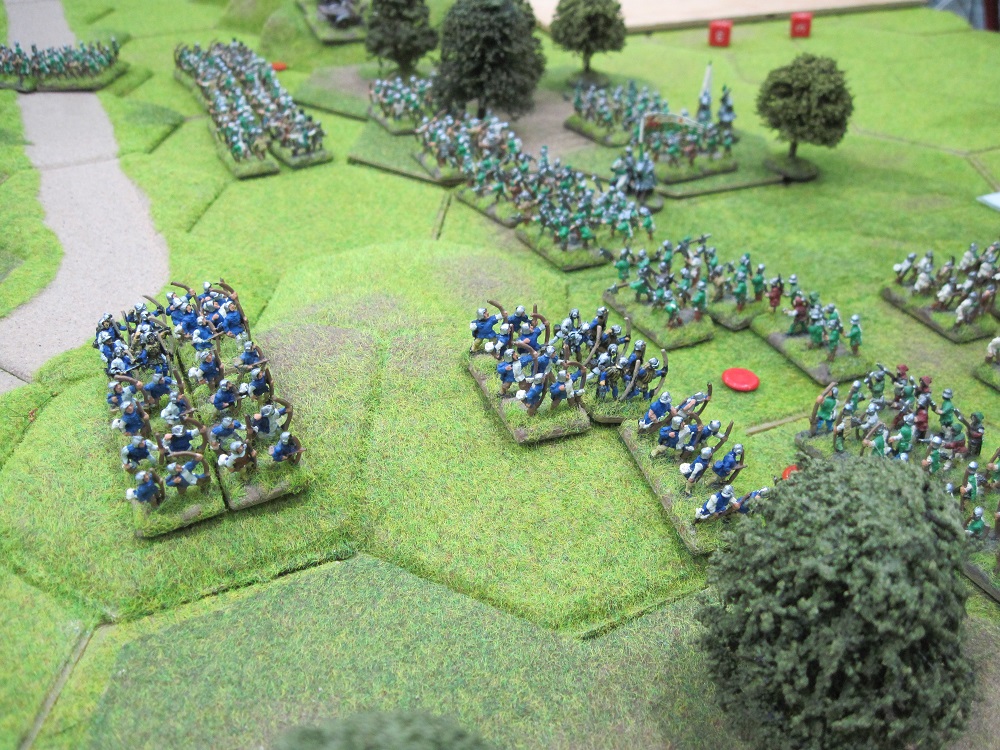 The fighting in the centre had been a pretty even affair with casualties mounting on both sides. There was a glimmer of hope for my Yorkist when my stubborn infantry finally defeated a unit of Tudor billmen and a general, but their loss simply cleared the way for the Tudor longbow to advance into a clear shooting position. The Tudor general and his accompanying ‘knights’ charged home into the rear of my centre. At the same time Chris finally found his longbow targets with an excellent set of shooting dice rolls which recoiled and disrupted both of my remaining generals. With both my generals disrupted and with what remained of my army trapped front, side and rear it was game over! 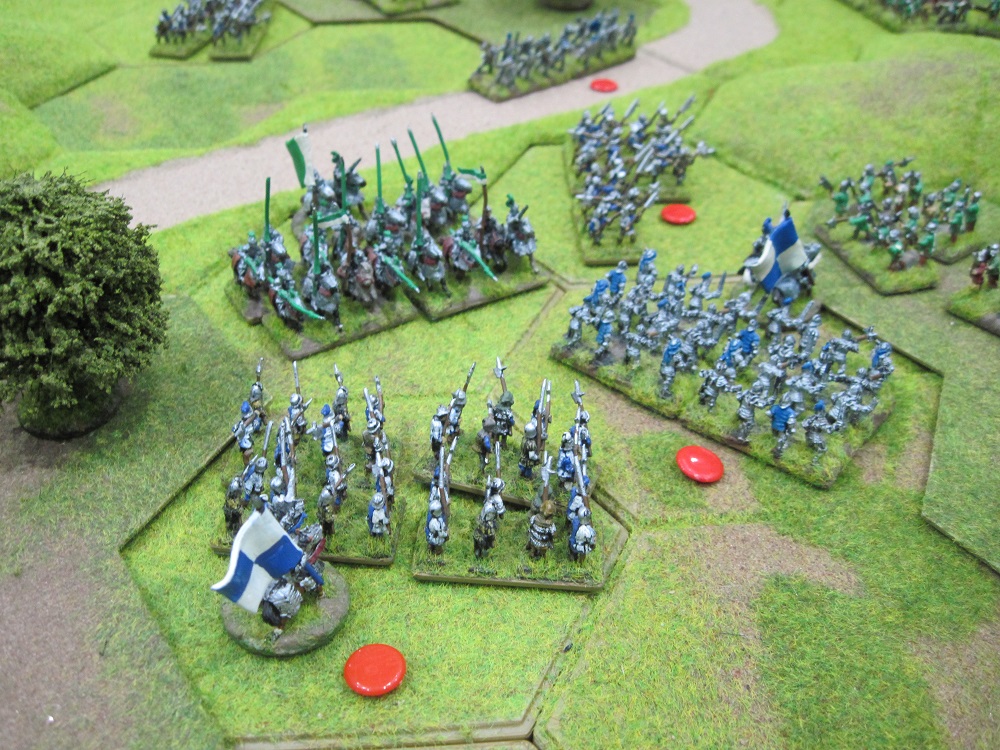 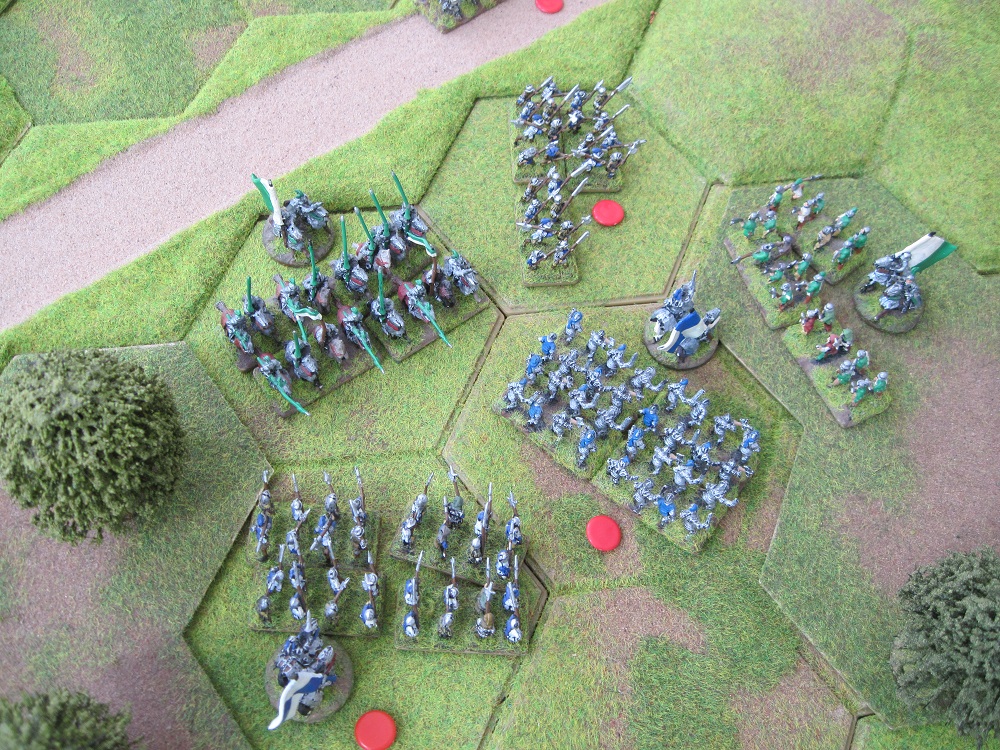 Game Analysis
My Yorkist army had a distinct advantage in terms of terrain relative to army composition with its greater number of hand-to-hand units to longbow. I also enjoyed a very favourable initial deployment with a clear opportunity to attack through and around woodland giving good cover from the shooting of the more numerous Tudor longbow. However, Tony hadn’t read the script! His completely unexpected early surprise attacks with his heavy cavalry gave him the early initiative which he used to effectively control and orchestrate the game thereafter. Chris’s dice rolling did ‘deliver the goods’ for him when needed, but in all fairness the dice rolls were pretty much balanced throughout. I humbly bow to a very noble win orchestrated by Sir Tony of Gil Gawath!
Kind regards
Paul