We set up this ‘Discord’ game of Hordes & Heroes where the two generals, Tim and Tony, could command their armies via their computer screens. This gave me the role of chief troop shifter and dice roller! Tim had run 3 games using discord and a ‘Too fat lardies’ rule set and I figured that it was my turn to host a game. 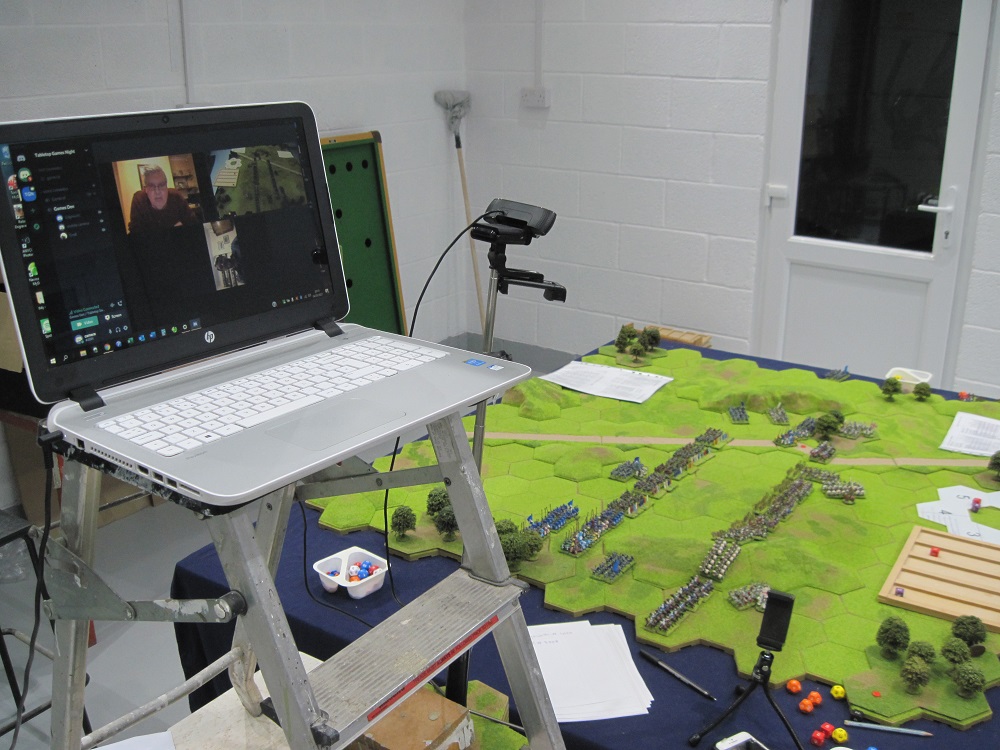 With camera positioned let the game begin! Tim had generalship of the English and Tony the French. I had compiled both armies to the value of 200 points and in line with historical tradition, given the English a large number of longbow units and the French a greater number of mounted and dismounted men at arms. 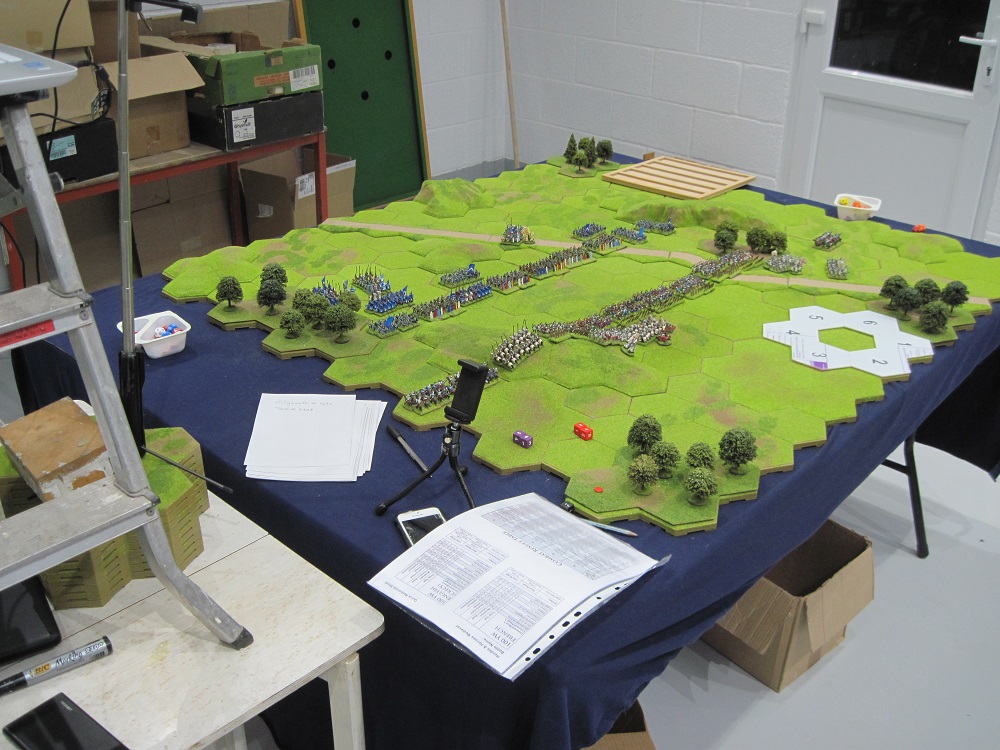 Opening moves saw the French crossbows pavisses to the fore advance in line towards the English longbows. In response Tim ordered his longbow units to plant their stakes and in doing so issued his challenge to the French to ‘come and get me.’ With the central crossbow units and longbow just out of shooting range, the game then shifted to the wings as the men-at-arms of both armies closed on each other to fight over a 4 hex hill on one wing and a 4 hex wood on the other. 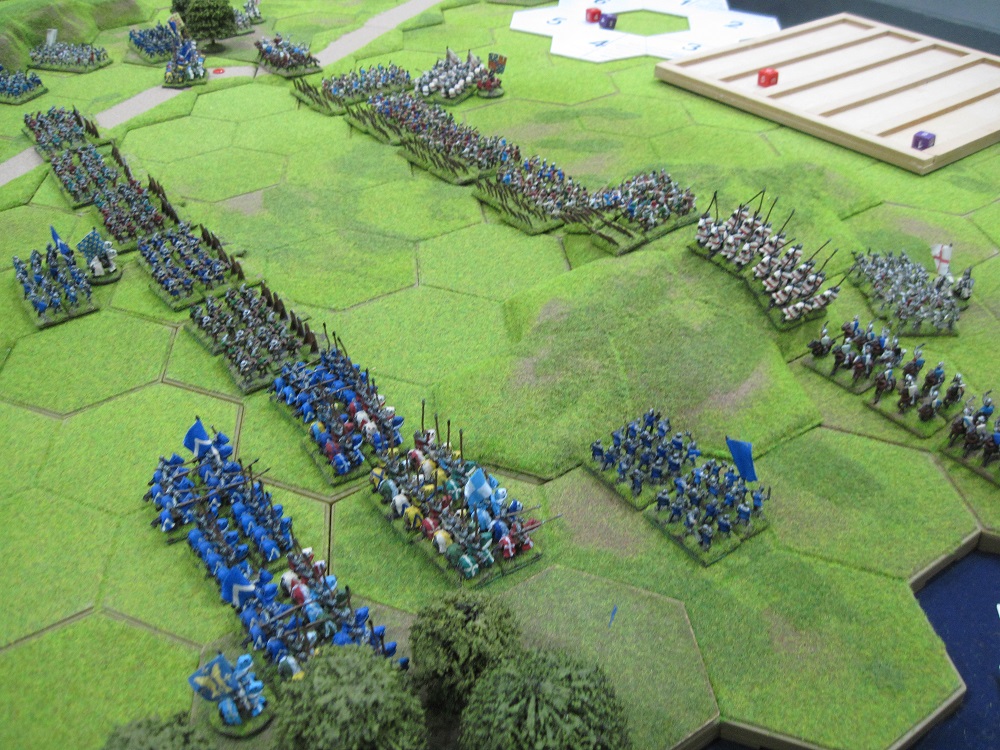 Tim’s English men-at-arms units despite being out-numbered on both wings initially gained the upper hand which compelled Tony to commit more units into the hand-to-hand fighting. The pendulum swung backwards and forwards for a good number of game turns until Tony pushed all three of his French generals into the combats. This heralded the loss of 2 units of English longbow and a unit of dismounted men-at-arms on Tim’s right wing which was now in serious trouble.

However, on Tim’s left wing the opposite occurred as his units successfully repulsed the French mounted men-at-arms causing them to flee along with a general. With only two units of English mounted men-at-arms, Tim wasn’t able to follow up this success and in a couple of game turns the French cavalry and general had rallied and returned to the fight. 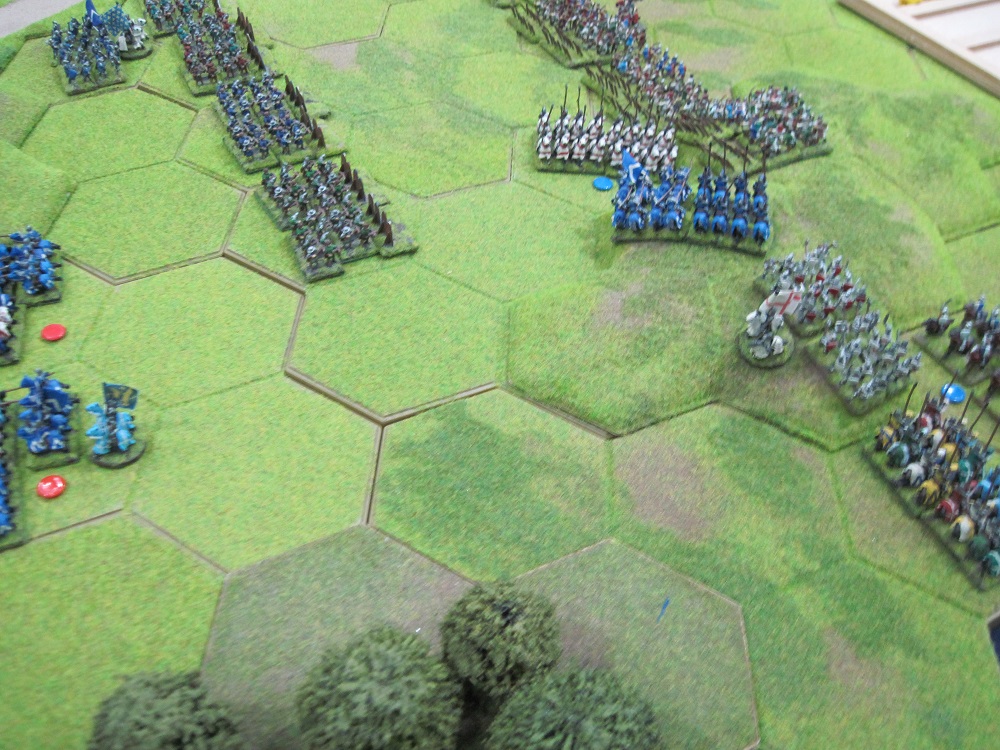 The situation on Tim’s right was by this stage changing from bad to worse for the English as Tony’s infantry including units of crossbow began to brake-up the English longbow line having out-flanked the line of stakes. This, combined with the a belated French breakthrough on the English left delivered a very hard fought win to Tony’s French.

This was a very close game in which both sides just failed to break the other on both wings until by a very slender margin the French gained the upper hand. The French strategy of not engaging the English longbow in a shooting match with the crossbow units was arguably the key to the eventual success. The mistakes of Agincourt were not repeated!
Kind regards
Paul