The draft version of Raging Empires, fast play, hex based rules are available to download FREE from the Kallistra website along with Play sheets and Unit Listings for 1914 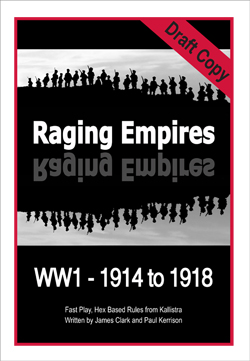 Well done! The only problem I see is that I haven't even started acquiring the Romano Brits yet, now I fear my Orcs are going to end up fighting the BEF!
Top

Fantastic for making this resource available, will go and look at them now. Norm
Top

Played a good game with these yesterday at Partizan. Some nice mechanics in them to make you make decisions

Below are some pictures from the game, sorry about colour of the photos, the yellow lighting was not helpful!

James and Paul chatting about the Raging Empire rules

I realise this is resurrecting an old threaddress but what sized forces were usedoing in the demo games from a couple of years ago. For some reason I am in a couple of the pictures from phalanx. Odd that two years later I may be making my first purchases for my new project!
"Woe to those who began this war if they were not in bitter earnest".
Mary Chestnut
Top

Sorry for the delayed response but I've been trying to find the planning sheet for above scenario which lists the forces involved. I seem to recall that the Germans had; one field gun battery(6x77mm), one battalion of infantry and a squadron of Ulhan cavalry. On the allied side there were; two battalions of French infantry, one battalion of British infantry, one squadron of British cavalry and a British 18pdr field gun battery. Now that I've made my best 'guestimate' I will surely come across the aforementioned planning sheet!
Kind regards
Paul

Thanks Paul, I thought it was roughly that from my memory of the game. I've switched my attention to the Somme rather than Passchendale for my own first foray with the figures and rules. I'm going to look at the fighting for Theipval Ridge which took place in late September. I might be able to get a small game going with a brigade a side by then (speed painting will be key!)
"Woe to those who began this war if they were not in bitter earnest".
Mary Chestnut
Top
Post Reply
14 posts

Return to “Kallistra's Hex Based Rules”