Cracking figures! Either you read my mind or you sculpted new figures in about 28.5 hours - I know which i believe......

Do I see the first 10mm pigeons in the hobby? Put me on the list for a couple of packs to collect from FIASCO in October (maybe I'll have painted all their minions I bought at the Triples by then!!
Top 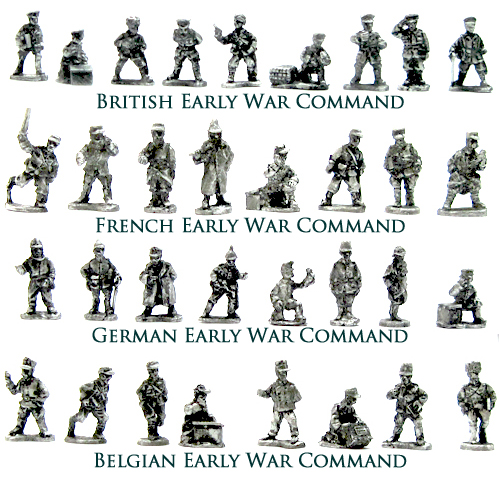 I would be keen to see 13 pounder QF guns as used by the Royal Horse Artillery. I need to build 'E' Troop RHA
Top

With the growing number of packs released now with the WW1 range, I 'm just wondering if there are plans to release more. Such as early war German Hussars, Belgium Guides and lancers possibly ?
And also other nations such as Austria and Russia?
Top

Hi Glyn,
We are testing the production moulds for the late war command packs this week. All being well they will be available by next weekend.
Kind regards
Paul

The 13 pounder QF gun was almost identical to the 18 pounder QF - only the barrel and bore were very slightly smaller, so the same model can be used for both because in 12mm scale it would be virtually impossible to tell the difference. Apparently many the 13 pounders were converted to 18s once the trench lines were established and the heavier shell became more effective with its greater High Explosive effect.
Kind regards
Paul

Yes, wonderful Early WW1 references.
May I suggest Belgian troops in greatcoats and dragon hat, french colonial troops (jacket and famous cylindrical fez) who participate a lot in the opening operations, and bicycle troops.
So many things to do!
Thanks for all!

. Good call. I have compared pics of both and a very small reduction of the recoil system will make perfect QF guns. Order with you for collection at Partizan. David
Top
Post Reply
18 posts